Infrastructure as Code is the new default: With tools like Ansible, Terraform, CloudFormation, and others it is getting more and more common. A multitude of services and tools can be orchestrated with code. The main advantages of automation are reproducibility, fewer human errors, and exact documentation of the steps involved.

With infrastructure expressed as code, it’s not a stretch to also want to codify deployment pipelines. Luckily, AWS has it’s own service for that named CodePipeline, which in turn can be fully codified and automated by CloudFormation (“Pipelines as Code”).

This article will show you how to create a deploy pipeline for a serverless app with a “one-button” CloudFormation template. The more concrete goals are:

We will start with a repository consisting of a typical small web application with a front end and a back end. The deployment pipeline described in this article makes some assumptions about the project layout (see the sample project):

For a start, you can just clone or copy the sample project into your own GitHub account.

As soon as you have your project ready, we can continue to create a deployment pipeline with CloudFormation.

After you click on the link (you need to be logged in into the AWS Console), and click “Next” to confirm that you want to use the predefined template, some CloudFormation stack parameters have to be specified: 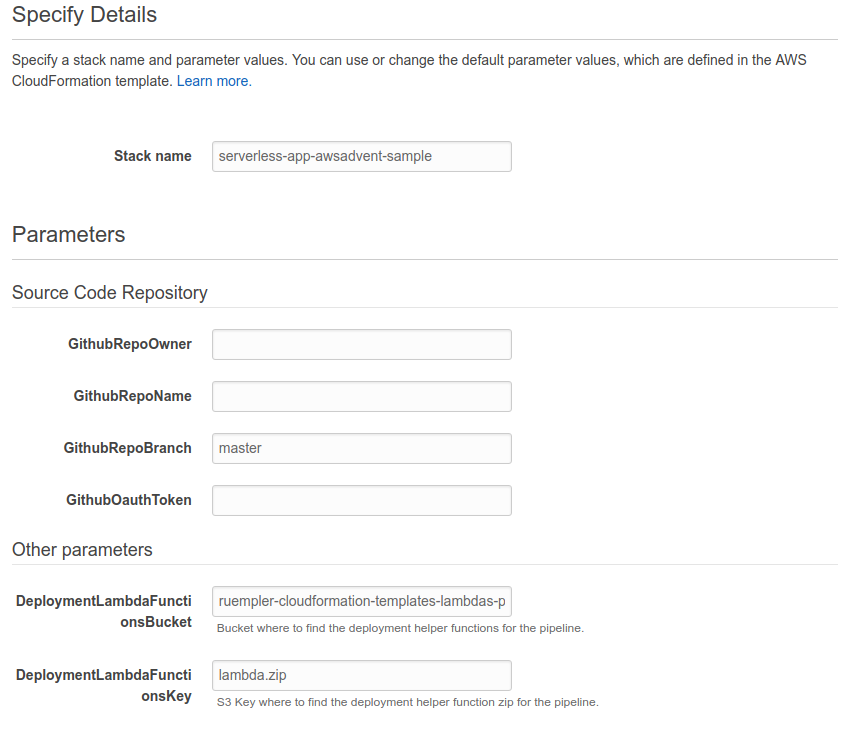 First you need to specify the GitHub Owner/Repository of the project (the one you copied earlier), a branch (usually master) and a GitHub Oauth Token as described in the CodePipeline documentation.

The next step of the CloudFormation stack setup allows you to specify advanced settings like tags, notifications and so on. We can leave as-is as well.

On the last assistant page you need to acknowledge that CloudFormation will create IAM roles on your behalf:

The IAM roles are needed to give Lambda functions the right permissions to run and logs to CloudWatch. Once you pressed the “Create” button, CloudFormation will create the following AWS resources:

(Update: in the meantime, I replaced the Lambda functions with AWS CodeBuild).

No servers harmed so far, and also no workstations: No error-prone installation steps in READMEs to be followed, no curl | sudo bash or other awkward setup instructions. Also no hardcoded AWS access key pairs anywhere!

A platform team in an organization could provide several of these types of templates for particular use cases, then development teams could get going just by clicking the link.

Ok, back to our example: Once the CloudFormation stack creation is fully finished, the created CodePipeline is going to run for the first time. On the AWS console: 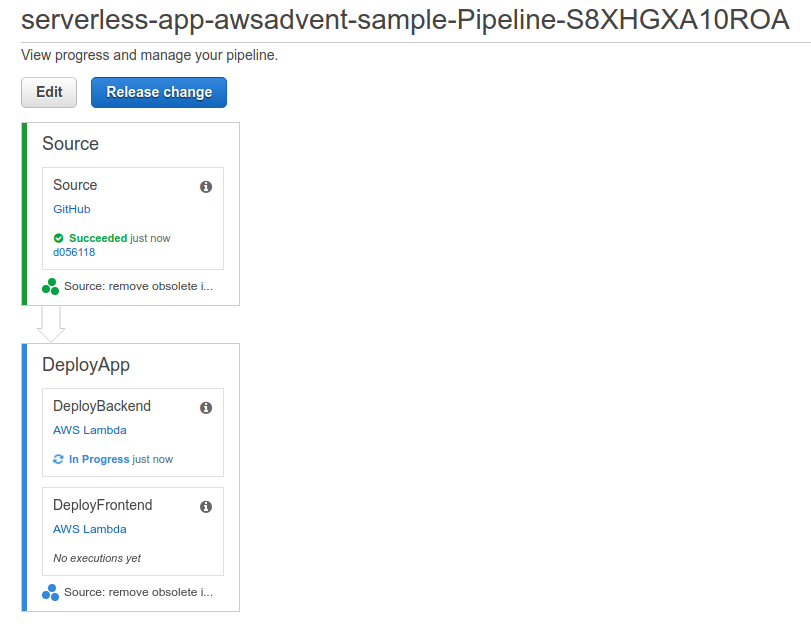 As soon as the initial pipeline run is finished:

To find out the URL of our website hosted in S3, open the resources of the CloudFormation stack and expand the outputs. The WebsiteUrl output will show the actual URL: 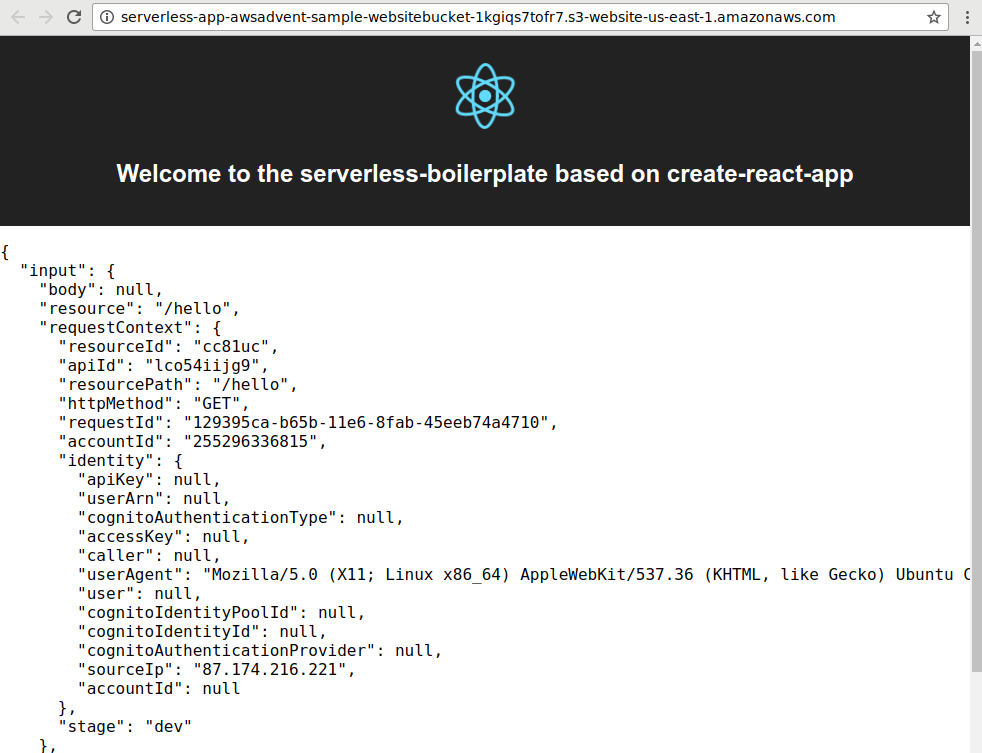 Voila! We are up and running!

As might have seen in the picture above, there is some JSON output: It’s actually the result of a HTTP call the front end made against the back end: the hello function, which just responds the Lambda event object.

Let’s dig a bit deeper into this detail as it shows the integration of frontend and backend: To pass the ServiceEndpoint URL to the front end build step, the back end build step is exporting all CloudFormation Outputs of the Serverless-created stack as a CodePipeline build artifact, which the front end build step takes in turn to pass it to npm build (in our case via a react-specific environment var). This is how the API call looks in react:

This Cross-site request actually works, because we specified CORS to be on in the serverless.yml:

Here is a high-level overview of the created CloudFormation stack:

With the serverless pipeline and serverless project running, change something in your project, commit it and view the change propagated through the pipeline!

I want to setup my own S3 bucket with my own CloudFormation templates/blueprints!

I want to have testing/staging in the pipeline!

The sample pipeline does not have any testing or staging steps. You can add more steps to the pipeline, e.g. another Lambda step, which calls e.g. npm test on your source code.

I need a database/cache/whatever for my app!

In this blog post I demonstrated a CloudFormation template which bootstraps a serverless deployment pipeline with AWS CodePipeline. This enables rapid application development and deployment, as development teams can use the template in a “one-button” fashion for their projects.

We have deployed a sample project with a deployment pipeline with a front and back end.

AWS gives us all the lego bricks we need to create such pipelines in an automated, codified and (almost) maintenance-free way.

Special thanks goes to the folks at Stelligent.

First for their open source work on serverless deploy pipelines with Lambda, especially the “dromedary-serverless” project. I adapted much from the Lambda code.

Second for their “one-button” concept which influenced this article a lot.

Along with 18 years of web software development and web operations experience, Soenke Ruempler is an expert in AWS technologies (6 years in experience of development and operating), and in moving on-premise/legacy systems to the Cloud without service interruptions.

You can find him on Twitter, Github and occasionally blogging on ruempler.eu.

Ryan Brown is a Sr. Software Engineer at Ansible (by Red Hat) and contributor to the Serverless Framework. He’s all about using the best tool for the job, and finds simplicity and automation are a winning combo for running in AWS.